We woke up and took breakfast on the balcony looking over Emu Bay.  You couldn’t help but be thankful that we had found our way to this place at this time with this view. It was stunning.  I almost had to peel myself away from the vista to get washed and ready, but I did and then we set off for our daily adventure.  We were heading for a nature day on the island and our first stop was the Hanson Bay Wildlife Sanctuary towards the west end of Kangaroo Island.

It was just over an hour’s drive but the views were stunning and we enjoyed a game of ’spot the dead wildlife’ on the way there.  There was no shortage and it was horrible to think that these poor animals hadn’t caught up with road crossing rules quite yet.  At breakfast, one of the Australian family members that had joined us, told us about the custom on the island where, as you cross paths with oncoming vehicles, you raise your index finger from the steering wheel as an acknowledgment to the other driver.   I passed the journey doing just that and had a 90% success rate which just added to the calmness and beauty of the island.  No-one was in a hurry, no-one was stressed and nothing really mattered.

We headed west along the South Coast Road and the scenery was much thicker and greener than any other we had come across outside of the maintained parks of Adelaide.  About half way there we passed a little sign telling us that were at Rain Creek and, low and behold, it started to rain. I really hoped that we wouldn’t end up at Shit Creek as we hadn’t packed our paddles.

Fortunately, we arrived safely at The Hanson Bay Wildlife Sanctuary and wandered around the gift shop for a while before following our guide out into the managed nature area outside.  We walked through the eucalyptus trees and marvelled at the dozens of koalas that were dotted about lazily snoozing in the warm midday sun.   They looked like big clumps of hairy chewing gum that had been wedged onto the branches of the tree.  They were slow and, apparently, very stupid.  Their spines are not connected to their rib cage so, should they drop out of their trees, they just bounce and get on with their lives as if nothing had happened.  I don’t think I saw any of them doing anything that put them at risk of ever falling out of their tree, but it must be nice to have that worry of spinal damage taken from your mind. 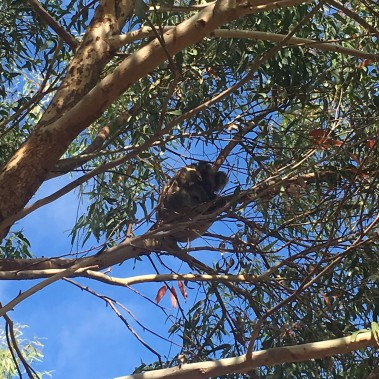 We then took a walk out into the wilderness and watched the kangaroos and their joeys pottering about, totally disinterested with us getting in their way.  It was a lovely spot and we all felt very lucky to be this close to nature.  It was so nice that I was happy to spend money in the gift shop. I know. Crazy. 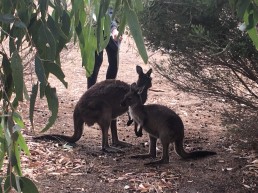 We jumped into the car and headed to the very South West tip of the island to a spot called Admiral’s Arch which I had been told was a ‘must see’. As we dropped down towards the car park, past a red topped lighthouse, the views were already spectacular.  The blue sky merged with the blue sea, the only difference being the occasional white topped wave.  Considering that the next land that you would come to if you swam in a straight line was the Antarctic, the scenery was incredible.  The road dropped away behind the lighthouse and it felt as is we were going to drop down into ocean.

Fortunately, we didn’t, we just ended up in a car park.  From there we zig zagged our way down the wooden walkways, stopping occasionally to take in the most stunning views.  From this position, lower down from the car park, you could see the rocky island just off shore and watch the waves crashing against it.  The way that the whole island was surrounded by a skirt of white water, it looked as if the rocks were in the middle of being pushed out from the ocean below, like the earth giving birth to a granite baby.  The power of the waves, the sound, the smell, the colours all added up to be an attack on the senses that I could hardly cope with.

The rest of the party had been before and, if I am being honest, I felt a bit rushed and I was getting worried that I wouldn’t have time to take it all in before we left.  I had no idea that I had just been blown away by the warm up act.  The clue was that there wasn’t an arch anywhere to be seen; the star turn was at the bottom of the hill, right at the end of the disabled access walkway.

Hurrying down to catch up, the views seemed to get better and better with every step.  Having been in the Grand Canyon a few short months before, I didn’t think that I could see a more amazing and grand view and yet here I was.  This was right up there and, because the waves added that extra element of movement and power, I think this just about took top spot in my eyes.  The smell was very, how can I put this, natural?   Big, fat, lumpy seals dotted about on the rocks, lazing away in the sun or the shade totally unmoved by the dozens of tourists walking on the wooden walkways above them. 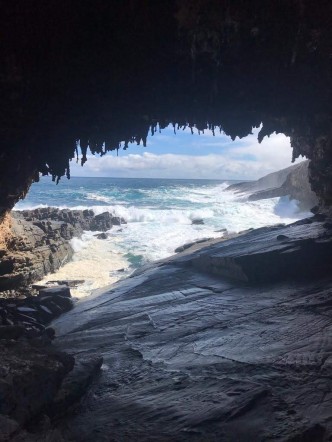 The archway is a rock bridge stretching above the angled hard rocks below, formed by years of erosion of the softer rocks that were, at one point, sandwiched between them.  Stalactites dropped down from the base of the land bridge above slowly extending their fingers downwards as if to try and touch the baby seals playing on the surf below them.  It was just about perfect.  I stood for what seemed like an age just trying to burn this view into my memory forever more.  I think I could travel for another hundred years and never match this spot for beauty.

I started to make my way back up the wooden steps and looked out to the east, around the corner if you like form the original view that I had seen coming down to the archway.  The seals were playing in the surf, I just wish I could have joined them.  It was a stunning mix of the light blue sea, the power of the white surf crashing randomly in any and every direction all fighting against the hard, jagged and unforgiving volcanic rocks ripping the surf from below.

But all good things must come to an end, and we still had one more spot to visit.  I was way behind the rest of the gang, unable to tear myself away, and so ended up running back up the walkway to the car to catch up.  We set off for just a 5 minute drive around the cove to a spot called Remarkable Rocks. I thought that it was a bit big headed of the place to give itself such a grand title and it always had a lot to live up to.
The rocks in question were hard granite boulders on top of the rocky cliff that were covered in a golden lichen which added to their look of power and, well, remarkableness, if that’s even a word.  They have been shaped, smoothed and eroded over hundreds of millions of years to form magical and mystical shapes that you can explore and, if it doesn’t sound too hippy-like, touch and feel as if you are connecting to history and nature itself. 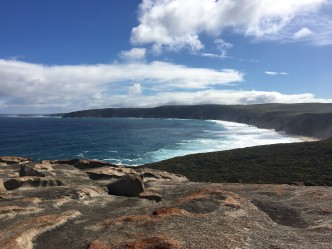 Many moons ago, magma rose through the bedrock under pressure, melting it and ripping off boulders as it went that became stuck in the molten rock like a cough sweet stuck in a throat.  The rocks solidified with the cough sweets still in there and then, over millions of years the softer rocks were eroded leaving these magnificent rocks exposed at the new surface.  The softer cough sweets became exposed to the air and eroded away to leave mysteries holes and scoops in the granite.  It looked like a giant had been playing with play-doh and naughtily left it out to dry up on the cliffs.

The sea was now well below us at the foot of the cliffs and you could no longer hear it.  The power and awe that you sensed down at Admiral’s Arch had gone and you were now in a more peaceful and magical place.  You could imagine this being the scene of a pagan festival lit by torchlight at sunset, it had that magical and special feel about it.

It was getting toward late afternoon and we had a two hour journey home, before the suicidal wildlife would wipe out our insurance cover.  The kids were tired and either slept or went digital on the way home, leaving me free to listen to Ocean Colour Scene on the way home.  I don’t think I stopped smiling all the way home. I was a very lucky boy and I hoped that the kids appreciated how lucky they were to have seen such beauty.

That night we ate dinner and chatted while playing a game of trivial pursuit.  We didn’t play properly, just picking questions and tested each other on the interesting ones.  Each question seemed to lead to a discussion and sharing of knowledge and culture between the top side of the earth  and the bottom siders. 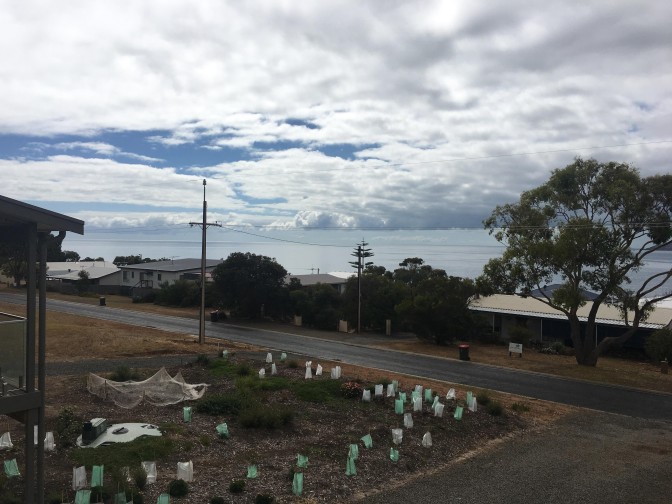 As everyone drifted off to their own homes or bed, I stood on the veranda watching the kangaroos eating fruit that we had left out for them and didn’t want this day, one off the best of my life, to end.  A piece of me will always be on Kangaroo Island I think.