Back in Blighty, we live very close to the seafront.  In the main it is an amazing place to live as you have salt-aired sea walks on your doorstep and the ever changing but always beautiful scenery unfolding in front of your eyes every time you leave the house.  By far, the biggest negative is the bloody seagulls that come as part of the deal.  All of the houses for the first mile or so inland have huge metal grills around their chimney pots to discourage the gulls from nesting.  If they do nest nearby, then you always have the ‘joys’ of an early morning wake up call which sounds like a scream in a horror movie, not the gentlest of ways to wake up.  Amazingly, for relatively small animals, they are also disproportionally heavy footed and walk about on your roofs like a teenager running down the stairs to claim the last slice of garlic bread.

But this is a blog about a trip to Adelaide, why am I telling you about this?  Well on day number 9 in Australia I woke up in a daze trying to work out where I was.  I knew I wasn’t in my bedroom back home but could hear seagulls walking about who seemed to be speaking in a funny accent.  It took me a few seconds to work out that I was in a different bed in a different country but couldn’t think how my seagulls had caught up with me and why they were putting on a funny accent.  My early morning brain power wasn’t enough to work it out on my own, so I was forced to get up and take a peak out of the window.

It wasn’t seagulls after all.  It looked like someone was running auditions for Nigel the Evil Cockatoo from the movie Rio.  Dozens of cockatoos with yellow flashes on their heads and big, bulging black eyes stared back at me from every roof top, tree and ledge that I could see.  I walked downstairs to the front door and stepped out to take a better look and to count how many I had missed on the roof above me. I think there must have been around 50 in total, all in the wild and all very angry at the trees that lined the main road. 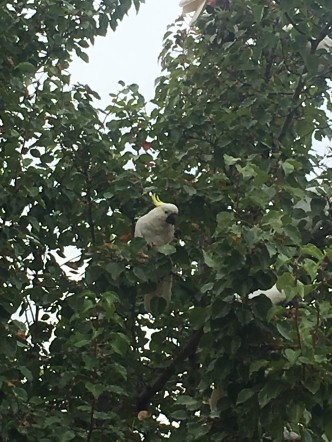 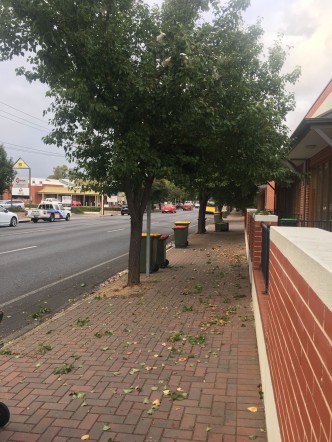 I watched them as they jumped into the tree outside our garden and started to feed off its berries.  I stood and watched for about ten minutes as they went to work on this tree and it reminded me of the scene in the World War Two drama, Band of Brothers, where two guys have set up position in the tree line and are spotted by the Germans who begin to return their fire.  The bullets whizz past them and each one trims a branch or leaf off and the tree slowly begins to vanish in front of your eyes.

As I looked down the street at the dozens of trees, the pavement was clean and tidy for as far as the eyes could see.  Under this one tree that the birds had descended upon, it looked like it had been trimmed by an ageing and blinded Edward Scissorhands.  I had never seen such a display by such beautiful animals and so up close it was the perfect way to get ready for the day ahead.

It was a travel day today.  We were driving down to Cape Jervis to get the ferry across to Kangaroo Island (KI). We packed up the Air BnB and filled our huge Tardis of a car with the cases and as many kids as we could fit in the back and set off out of town.  It was a lovely drive and the thrill of seeing the sea again at some stage made each turn in the road that bit more exciting. The browned fields were filled with big old trees and the whole area looked like it was just crying out for a drink of water.  Eventually we turned a corner and a ruddy great lighthouse met us before we dropped down the hill to the ferry terminal.

I think ferry terminal is possibly giving the wrong impression.  This wasn’t Dover or Calais. We are talking a small building with about 40 parking spaces at the most.  But it was clean, it was was surrounded by beautiful scenery and it had that buzz about it that you get when you are at a travel hub.  Everyone is excited to be there but more excited to be somewhere else soon.  You could see land that looked no more than a mile or two away and so I wasn’t sure if it was Kangaroo Island as the ferry was due to take about an hour.  It turns out it was either a lot further than it looked or it was a much slower boat than I had anticipated as that was our destination. 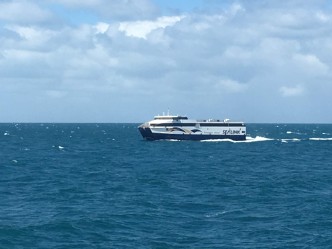 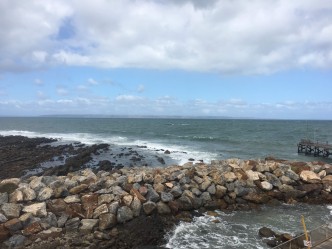 The weather warnings that we had been so worried about the previous night were premature.  There were a few white caps on the waves but they were very gentle despite the fairly stiff wind.  The rest of the gang had to walk onto the ferry as foot passengers and I was left to drive the car onboard.  There must have been the full 40 cars to board and there must have been space for 35 at most.  What followed was the most amazing game of car Jenga as the cars were packed and, no doubt the load balanced, perfectly by three of four dockers.  I was wedged between two utes, a people carrier and a large metal pole.  I had to get out of my car before the next car could pull up next to me, space was at such a premium. 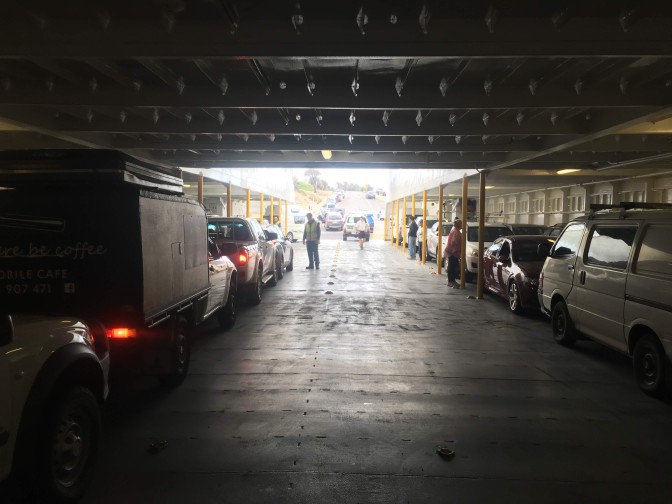 I made my way on deck and met up with the foot soldiers who had already loaded.  The ferry pulled away from the dock bang on time and we were off.  The rocking of the boat mixed with the thick diesel fumes (and the loads of sweets I had eaten in the car) made it a slightly sickly journey.  It was improved by a seal swimming past the ferry and the rainbows formed the spray as we dipped and rose across the open sea. 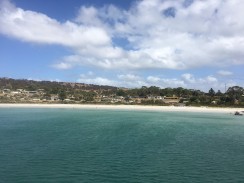 As the mainland got smaller and smaller behind us, Kangaroo Island became bigger in front.  We docked at Penneshaw and began our KI adventure.  Penneshaw was a small village that had the feel of a Northumbrian village and you got the impression that the same families had lived there for generations and everyone knew everyone else.  We had to make our way around to Kingscote which was the biggest town on the island and the administrative centre.  It is also the closest town to the Airport that also connects to Adelaide, where the newly weds were flying in to join us on the first stage of their honeymoon.  We would then be joined by the rest of the wedding gang for a family gathering at our Air BnB which was overlooking Emu Bay.

We met up in a little restaurant that was part of the Aurora Ozone Hotel. I wasn’t all that hungry after the ferry trip and so just had a bowl of chips.  They were right up there with the best chips I’ve ever had and, trust me, I’ve have a few in my time!  Perfectly salted and with a sprinkling of herbs on top, they were crunchy and moist and if I could have had them for every meal for the rest of my life, I wouldn’t be too unhappy about it.

As we made our way back to the car I was amazed at just how relaxed things were on KI, even the dogs are free to drive into town to pick up a bone at the butchers. 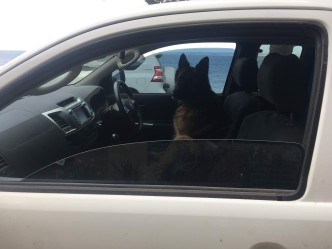 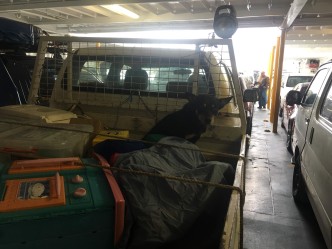 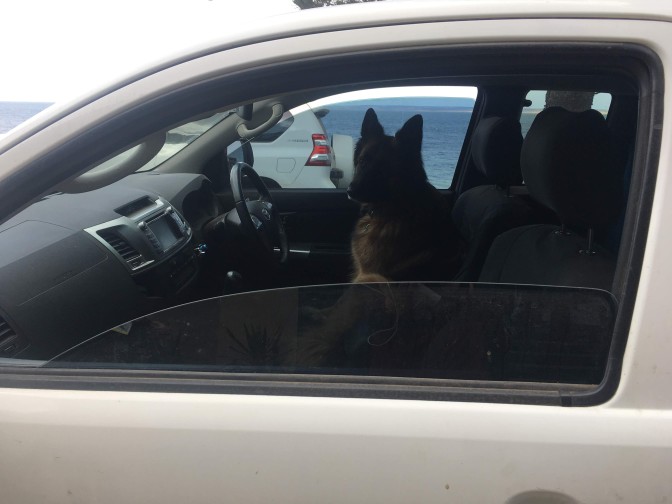 After a day stuck on the ferry and cooped up in the car, we let the kids run off a little bit of their pent up energy at the play park before setting off for the 20 minute trip around to Emu Bay.  Again, the buzz of finding out where we would be staying was very real and that was amplified as it had been booked by Titchy’s sister and so we had no idea what was to come.    We drove into Emu Bay and it looked like a little holiday village with lots of detached holiday homes lining up the hill overlooking the bay, each with a veranda overlooking the amazing views of the bay.    Our house was no different, glass sliding doors fronted both floors of the front of the building and it couldn’t have been any more than 3-4 years old.  The rooms were spacious and modern and most of the upstairs was a kitchen island/dining area/living room.  A huge open space that opened out onto the balcony where we could eat our dinner overlooking the sun setting over the bay.  It was heaven.

We dumped our bags and wandered down to the beach to take advantage of the early evening warmth.  Myself and boy child were in our swimming shorts and into the heavy surf jumping around like idiots in the waves.  We watched pelicans landing on the water and threw a lot of seaweed at each other and generally messed about in what felt like our own private beach.  The odd looks from locals walking down the beach in hoodies and heavy coats didn’t put us off, it was warm enough to be in the water no matter what they thought.

We headed home, beaming from ear to ear with our new home for the week. We showered and explored the house and unpacked before making our way over to the other house that our party had which was on the other side of the road and three doors down.  We chatted, we cooked on the barbecue and watched the sun change from yellow to orange and then duck behind the horizon.  I got the impression that even the sun was disappointed to leave this place and would be happy enough to come back in the morning. 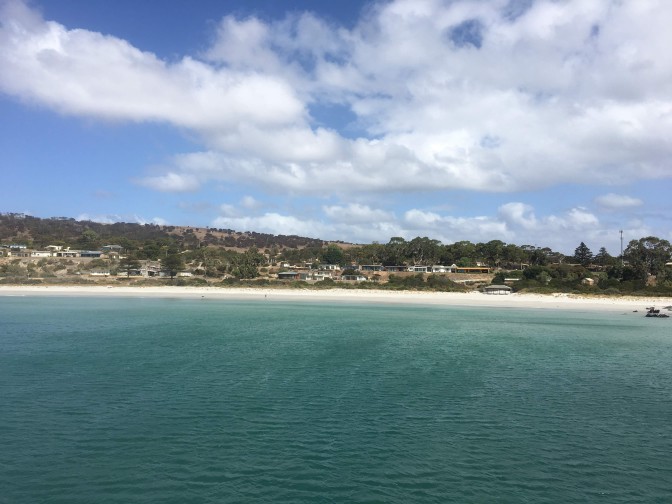 We said our goodbyes and made the short walk home.  We didn’t think it could get any better but then we realised that our lawn was being mowed by three kangaroos.  They looked at us on the road but didn’t seem too bothered so we edged around them and back to the house.  We sat in the darkness and talked in hushed tones as we watched these magnificent creatures chewing away.  It’s called Kangaroo Island for a reason apparently, who knew?