I had had a nice night on Friday, it was date night and Titchy and I had a lovely evening chatting and being daft over a lovely meal in our local pub.  All of the kids  were away for the evening and so we were able to enjoy a lazy Saturday morning in bed and I volunteered to make the tea and butter the bagels.

As we sat, like a proper middle aged couple, drinking tea and reading our books and enjoy the peace and quiet.  I needed that rest.  I had been under the weather for a week or two.  Nothing bad enough to keep me off work like flu, but just me being at about 80%.  I had a pain across my lower back, I had lost my appetite and I was feeling a little sickly.

As I lay there, I wasn’t really reading my book, I was just looking through it as my mind wandered. I was as happy as I had been in ages.  I was lying comfortably in my new house, our relationship was going well, I was enjoying my job and my kids were happy and healthy.  We were thinking about holidays for the year and the world, as they say, was my lobster.

As my mind drifted and I started to think about where in the world we might like to go two questions hit me at almost the exact same second.  The first was “Why is it that when I am comfortable and I start to think about things do I always end up with my hand on my balls?”

The second question was, and this one felt a little more important,  “What the hell is that pain in my bollocks?”.  I hadn’t played football or been running as I had been under the weather and so it wasn’t a sports injury, so I continued to have a little root about.

I found a lump, about the size of a smartie, and it was as painful as having a child’s confectionary sized lump on the most sensitive part of your body.  I think Titchy must have seen the look on my face, she is used to me cupping my gentleman parts when I’m relaxing so I knew it wasn’t that, but I was in a bit of a panic.

“I’ve found a lump Titchy” I said. Well, I didn’t, I used her proper name, but you know what I mean.  “It won’t be anything to worry about, relax.  Most of the time these things are nothing serious” she said in her usual calm and comforting way.

It was too late for that, I was already waaaaay beyond panic and getting close to a full on meltdown.  I still have a load of things that I want to do, places I want to go and I want to see my kids grow up and I want to get old with Titchy.  I was too young to die of testicular cancer, this wasn’t fair.  I didn’t want to wait for a professional to diagnose me, I already knew. I was working out how I would look with no hair and wondering what songs to request at my funeral.  I wasn’t going to fight it off, I had already decided that I was done and dusted.

I can’t actually describe how I felt for the rest of the weekend. I was empty of feeling but full of anger and worry and bitterness that this was happening to me.  I felt, at the same moment, everything and nothing.  Titchy spent the rest of the weekend calming me down and telling me that I was going to be fine.  I tried my very best to believe her.

This morning I called the doctors and I made an appointment for 11 o’clock.  In my usual style I was there for 10.40 and as I sat in the waiting room I regretted being so early.  I would guess that there were about 20 people in there and 19 of them appeared to have a cough that wouldn’t stop.  I was going to get flu and this was exactly the sort of thing that was going to delay my chemotherapy session, I could tell.

Titchy sent me a message to ask how I was feeling; was I nervous about showing my bits to the doctor.  I didn’t care, I wanted to know how long I had left and I would happily run naked up the high street if it would get me the answers I wanted and needed.

I eventually got in to see the doctor and explained the confectionary growing on my  knackers situation.  He asked me to jump on the bed and take my pants off.  I was tempted to ask him to buy me a drink first but there is nothing like the sound of rubber gloves being snapped into position to kill any humorous vibes.

After a brief inspection (brief but not as tender as the way one would inspect oneself),  he wheeled away and the gloves were off now. Literally.  “Well, first thing to say is that there is nothing to worry about, it’s nothing to worry about…..”  I could see that his mouth was still moving but I couldn’t hear what he was saying.  I was in tears, floods of them.  I was going to be around for a bit longer and do and see all of the things that I was thinking about just 48 hours before.

The doctor’s mouth had stopped moving now and he looked at me in the same way that Titchy had looked at me when I first spotted the issue.  I snapped out of it and started listening again.  “I can see that you had assumed the worst, but it’s all fine.  It is more common for a man of your age to have a cyst down there than to not have one.”

I let the little jibe about my age go, I had other things to worry about.  I had a cyst on my testicle and that was normal.  That was a good thing and my life was going to be normal again.  I was given a prescription for antibiotics if I needed them, and I was out of there.

I texted Titchy right away to tell her I was fine and walked the 5 minutes back to my car.  I managed to hold myself together all the way through the reception area but as soon as I was outside I was back to crying.  I sat in my car and just sobbed my relief for a few minutes.  Everything was going to be fine.

So why, in this travel and photography blog, am I telling you all of this? Well, on the drive to the Metro station there was a section on the news about women avoiding smear tests due to the embarrassment of the procedure and, even worse, as they were ashamed of their bodies.  That’s crazy.

The last thing that was going through my mind while the doc had my crown jewels in his hand was “I hope my garden has been well trimmed”.  This was as close to life and death as I had ever been.

To all women readers – go for your tests and take care of yourself.  Unless you have two fannies or one that dispenses cappuccino, then its nothing that the professionals haven’t seen before. They care about your health, they don’t care what you look like down there.

To all of the male readers, I urge you to take a good look at your balls and give them a good old feel.  Even if you don’t feel anything wrong with you or them, then have a feel right now so that you know what normal feels like.  If you don’t feel anything, you had a play with your balls and that’s always good, if you do, then get it looked at as soon as possible.  It won’t get any better but it might get worse. 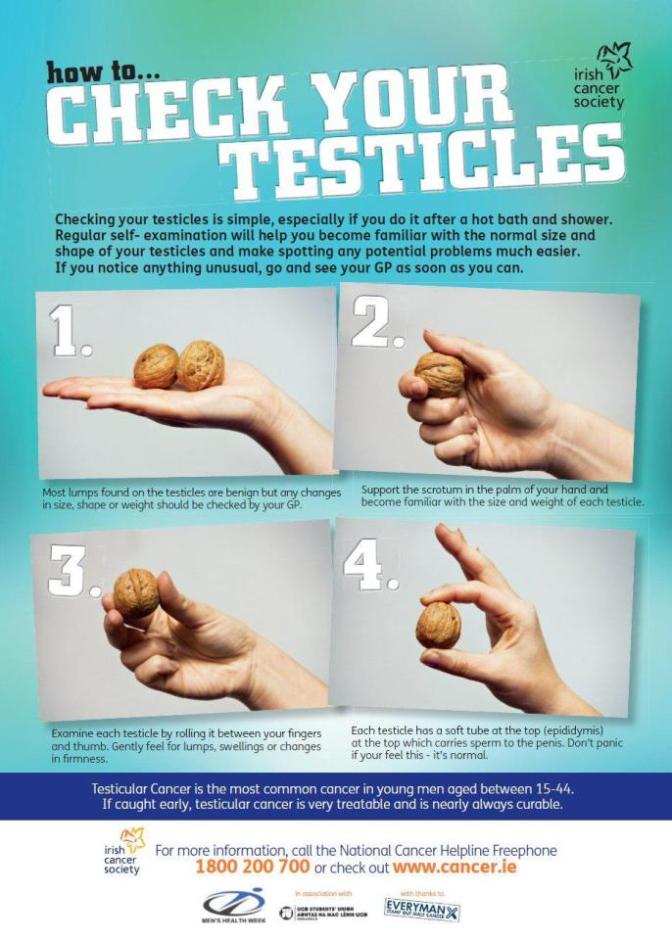