I got to the ferry terminal at Dover at 8.45 and stretched my legs around the departure lounge.  I bought a new set of breathalysers which are compulsory in France as I had noticed that the ones I had were out of date.  I was going to try and wing it but the paperwork I was given on arrival specifically asked me to check they were in date and, so to avoid an international scene, I bought new ones.  Thinking that I would be ripped off if I bought them on the boat, I bought them at the terminal only to find they were 50% cheaper on the boat.  Add to that £3.20 for a hot chocolate on board and I was having second thoughts about this trip!

The sailing itself was perfect, the channel being a mill pond.  Having French and British passport control in the UK meant that as soon as the boat docked you just drove off straight into France.

I had downloaded a map app that allowed to you plan routes without having to consume data.  It sort of half worked but not really, every so often it would kick you off the motorway and send you along minor roads.  For your serious truck driver that would be a killer but for me, with time to kill and nothing interesting to see on motorways, it was bloody marvellous.

My host for that evening was an old workmate who lives just outside of Gent but as she didn’t return from work until gone six, I had loads of time to potter up there.  I initially headed for St Omer as I saw the sign as I got off the ferry and it brought back lovely memories of camping trips as a child.  It was always the last place that we would camp before we came home and we always ended up at the same campsite that was run by a little chap and his wife that we always called Rene as he looked just like the café owner from ‘Allo ‘Allo.

In my mind’s eye it was a tiny village and so, when I got there and found a lovely little town that was bustling with children getting out of school, I was very surprised. It was equally lovely and lively.

I decided to try a local burger bar called McDonalds, nothing like authentic French food.  Nothing at all like it.  Their free WiFi (to allow me to update my mapping app) was the main driver.

Once I was all French fried up, their lack of chicken select meals was very disappointing by the way, I followed the river Aa through side roads.  I stopped for a while to watch a barge negotiate a lock.  I was in the perfect position to record the barge as it dropped around four meters through the lock.  That was until the little window of the office slid open and the Lock Keeper opened a volley of French at me that, I guess, translated as “get off that bridge you crazy bastard, we are trying to move a boat here.”

I shuffled off the quickest route I could and wanted to drive off as quickly as I could, but as I had a canal between me and my car by that point, my shame was extended until the barge slowly shuffled off.

I pottered slowly up into Belgium to my friend’s house just outside of Gent, a little place called Merelbeke.  It was the loveliest house in the loveliest of areas and we sat in her back garden and enjoyed a BBQ.

It was great to catch up. It has been almost three years since our last catch up, and the conversation eventually swung around to what she missed about England, where she had lived for six or seven years.

I was stunned.  Apparently, our obsession with eating crisps is a bit of a ‘thing’ in Europe.  Over the water, they don’t mind a crisp but only as a nibble to enjoy with a glass of wine or beer.  The fact that we Islanders, as we are called over there, choose to eat crisps with our sandwiches at lunchtime is considered a bit weird.

It was also considered typically English that I took my barbequed sausage and popped it into bread to make a sandwich.  I didn’t even think about that as being remotely weird!  The fact that they eat raw cows made me feel a little bit more comfortable about who the weird one was!

I slept on the settee that night, but in my sleeping bag to prepare myself for when the camping kicked in for real. 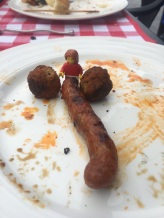