I set off from the North East of England after a few weeks of packing and preparing.  The car is busy but not packed to bursting. I am travelling so light in fact that the parcel shelf still manages to pull over my kit so my car doesn’t look like a flashing sign to car thieves to break in.

In many ways, it has been a hard trip for me as I know that by travelling alone I am upsetting many loved ones, not least Titchy Feet.  But this is something that I have wanted to do for a while, and it is not something that I am doing without their thoughts.  This is an itch that I need to scratch.

It is not until now, sitting on the ferry on day three of my adventure that I think I understand quite why that itch has developed.  As I child, we used to have family holidays around Europe in a VW campervan.   I was picking up some stuff in a shop last week and I noticed a roll-on deodorant made by Brut.  I was strangely drawn to it and decided to buy it.

I wore it for the first time this morning and, as I drove to the ferry terminal, I realised that I carried the exact same smell of my late father.  I was on an adventure, maybe trying to be my Dad, trying to be as strong, as fearless and as cool as my dad was on those trips.  The memories were as thick as the proper gravy that we used to have on our pie and chips at the Hovercraft terminal, our traditional departure meal back in the day.

Whatever the reason, as I sit now half way between the mainland and our great island, it is too late to back track and I wouldn’t want to anyway.

Anyway, back to the last few days.  I have a friend that lives just outside of Woking and that was to be my drop off point for a few nights before heading off.  No matter how good the planning, I was never going to remember everything and it wasn’t until I was half way down and ticking things off in my mind did I realise I had forgotten a plate and pillows…. both easily sorted subsequently at a supermarket.  Tent, sleeping bag, gas cooker and a million tins of beans was all that I really needed.

On arrival at Woking I attended a speaking engagement my host had at his local church.  It was a fascinating talk on the history of Jews from 70 AD to the modern day.  Not something that I would have ordinarily rushed to attend but it was interesting and thought provoking.  A perfect reminder that for the next 10 days I will be trying to open my mind and say yes to as much as I can to experience new things and take on new adventures.  I want to be the best version of me that I can.

I had driven down on cruise control most of the way, 70 mph on the open road and 50mph for what felt like most the way in the average speed check roadworks, and had managed to get there on an average MPG of 60.1.  Not too shabby at all!

I had arranged a stay over at a friend’s house just outside of Gent as part of my trip and she had asked if I could bring her a particular type of vodka from the UK that she could not get hold of in Belgium.  Supermarkets didn’t stock it (believe me I had tried several) and so my Woking host took me to a specialist independent off-licence in West Byfleet.

The happy little man behind the counter sorted us out no problem at all and so to celebrate we headed to the coffee shop just down the way for coffee and pretty damn good cake.  The weather forecast suggested 95% chance of rain between 10-1 and so we took our time over our break and then pottered our way around pretty villages and a huge house called Chobham Place House.  We were tempted to scale the fences to see who was on the other side but thought better of it and, instead, opted to head for Chobham Clump.

We had a great walk, with the rain just about holding off to no more than the occasional drizzle.    We walked by, and had a lovely chat with, two gents that were flying model planes around the large open space of the heathlands.  My late grandfather, who served in the RAF during the war and brought me up on his war time tales, would have been so proud of me identifying the black and white invasion stripes on the wings of the plane, but not so proud of misidentifying the Mustang as a Spitfire.  Poor show. 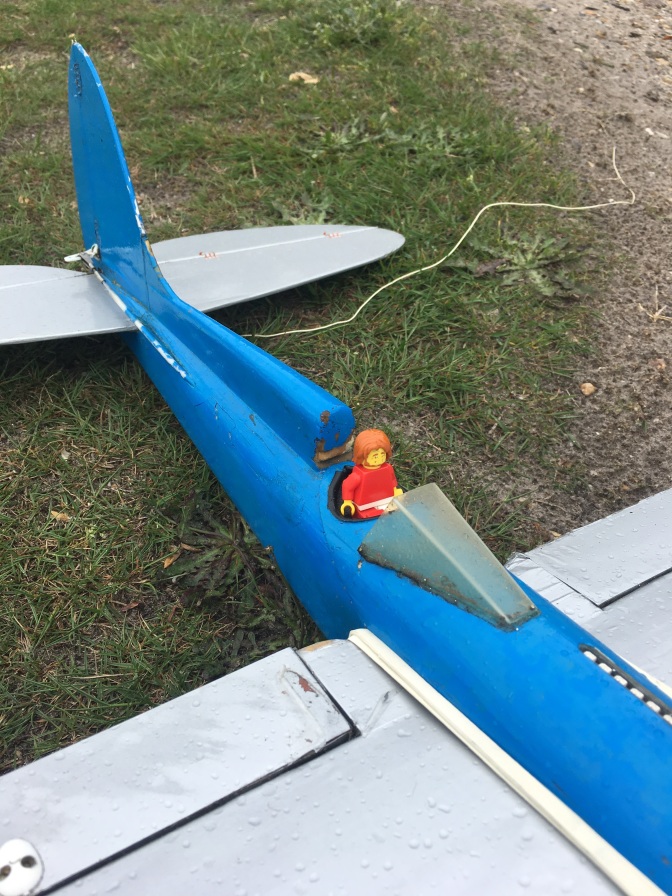 We headed for another drink to reward our efforts at the Four Horse Shoes, the most Horsey and outdoorsy pub I had ever seen.  As we didn’t have a bike, jodhpurs or a dog they were not too keen on serving us but they backed down in the end.

Our lungs full of the fresh air and our appetite built up, we headed home to wash and get ready for the evening meal at a superb Indian restaurant called the Kayal.  Back home fully content and, at last, feeling excited about the road trip rather than nervous, it was time for bed.