This was it, race day. I had another think about what Abdi was going to be doing on race day.  I just checked, and he was going to be in the same race as me and had previously done it in one hour and four minutes.  Maybe a massage, some fruit a warm up run and a protein shake.  Who knows?  I walked down to Dennys and ordered a pancake and refused the eggs and bacon that came with it, that was my preparation and training complete.  One thing that stood out at Dennys were the cartons of milk on the table that were infused with vanilla. As sweet as anything I have ever tasted and set us up for the day with a kick square between the eyes!

We finished up and started to walk back to the hotel, a 20 minute walk, but stopped off at was supposed to be a discount store for clothing but was, I think, just a bloody big jumble sale.  Imagine the presentation of TK Maxx mixed with the absolute chaos of Primark with the smell of a jumble sale and you are close to the hell that it was.  I got out quickly as my nerves were kicking in and I needed to plan.

One thing I have always been told about running is that you should never do a long run in any new kit in case it causes you problems.  My intention had been to do a training run in Vegas to test out my new shorts and make sure the temperature and conditions were not a shock to me.  I hadn’t.  The shorts had a built-in pair of compression shorts and a pouch to slot your phone in, I wasn’t sure if my phone might jump out of it and so I would be better off with my usual arm band.  I therefore spent an hour in my room running back and forth in my kit working out options and sorting out my bib and working out which top to wear.  I wasn’t sure if I should wear my new official Rock and Roll marathon top or my normal running gear.

My ankles were sore but that wasn’t a trouble. The terrible diet and the lack of sleep were the main concerns.  The other thing troubling me was that the Vegas strip was closed off for the day and so the traffic was going to be a nightmare.  N and J were starting their 10K race pretty much outside our hotel and so they were fine, but I had to get to the far end of the strip for my start party.  I didn’t want the panic of being late and so organised my ride down there very early.  I wandered through the casino floor dressed for my run and I have never felt more out of place.

My early pick up was perfect as the roads were gridlocked, even with my driver’s specialist knowledge of the shortcuts.  In the end, he got me pretty close but then I jumped out and just followed the crowds of runners walking in the same direction and trusted that they knew what they were doing. As I walked into the huge open area that had been sectioned off for the start party, I got my 10,000 steps on my Fitbit.  Again, not sure that was great warm up for the race!

I had never been involved in anything this big.  There were 18,000 people running the half marathon plus the marathon was starting at the same time and that was over 20,000 people.  The great north run is 12,000.  This was big.  There was a stage with a full on concert taking place before you started the walk up to the strip but I was too nervous to listen to that.  I fuelled up on bananas and water and had three toilet breaks in an hour.  I wasn’t enjoying this wait, but it was better than being late. 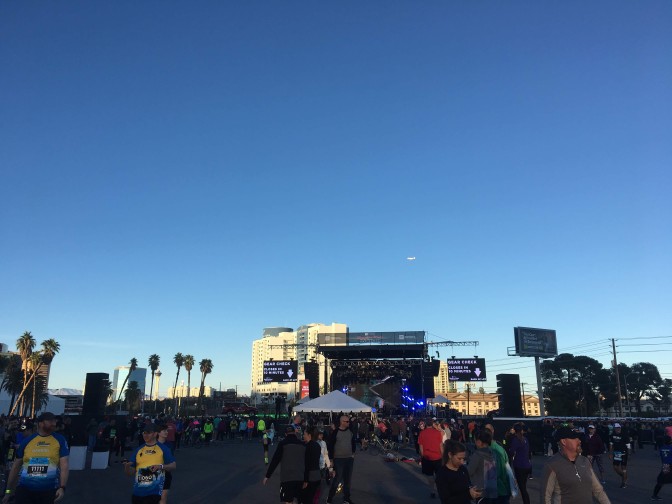 Eventually, 5pm came around and it was time for my corral to round up and walk up to the start line.  It was maybe a half mile walk and I immediately needed my fourth comfort break.  I asked a yellow topped marshal if there were toilets ahead and he said yes, keep moving, I got the impression he would have said anything to me, the ‘keep moving’ part was what mattered to him.  45 minutes later we were still standing just off the strip waiting to get started, listening to other runners setting off and I was terrified that we would be started without fair warning.Eventually, at ten to six, we were let loose and we walked to the start line.  Being in group one I was right at the front and due to set off at six.  I was about to burst.  I spotted a huge empty bottle of Gatorade and then my subconscious took over.  Before I had time to think about it, the empty bottle was opened, it was tucked into my compression shorts and I casually refilled it whilst standing on one of the most famous roads on the planet.  If it was a UK sized bottle of pop I would have had issues. It was a US measure but I still got three quarters to the top before casually leaving it at the side of the strip.  I half imagined a policeman chasing me for the full 21KM ahead, but I think I got away with it!

Under a load of flames, excitement and eternal pizazz, we were off.  I started really slowly due to the crowds that seemed to be mainly overweight Americans walking the course from step one.  Within half a mile there was a McDonalds at the side of the road and, I swear to god, there were ‘runners’ going in there.  Despite the slow start, the field opened up pretty quickly and I was running faster and on clearer roads.  We started off running out past the airport and past the famous Vegas sign.  Lots of people stopped to get a picture there and made the running even easier for me.

There were a lot of people running with the stars and stripes in their hands as it was Veterans Day and it was great to see the response that this got from the crowd. They really do love their flag and their veterans out there.  We turned and ran back through Vegas, all the way past the Stratosphere and back down into downtown Vegas.  We made the turn at Fremont Street and headed back to the strip.  Having run past the finish line half way down the strip, I knew exactly how far we had to run back and the legs started to feel very heavy.  There were no crowds to encourage you in the downtown area and it was dark and, I think this is true, the streets were coated with a treacle that seemed to make each step so much harder than the last.  I was nowhere near my target time of two hours despite feeling so strong up until this point and when I got to 18km I had to stop to catch my breath and take on some fluids.  I was used to drinking from bottles on a run but this event just had paper cups.  Lots of them, but they were a bugger to drink from without throwing it up your own nose.

I was disappointed that I hadn’t run it all and disappointed that my two hour target had not been met but, with my build up and preparation in general being so poor, it wasn’t a huge surprise.  I could see the purple lights at the finish line ahead and suddenly I got my second wind and the build up of nerves and adrenaline came out.  I knew I was going to finish and I was pumped. Every part of me wanted to swear and scream as I finished but this was America and I was representing my country, I kept the emotion inside.

Two hours and 19 minutes after I started, I was done.  I could start my holiday now!

There was a about a kilometre of fenced in finishing walk where you picked up a medal, a warming silver sheet to stop the chill getting to you and all sorts  of beers, water, nibbles, snacks, Pringles, nuts and God knows what else.  I met up with C and J at the arranged spot at the Bellagio fountains and walked back to meet up with N and her family from Costa Rica.  I was greeted with a Spanish chant that I didn’t understand but it made me feel like a superstar and I was very happy to be back amongst good friends.

N and J went off with their family for dinner and Charlie took me for a burger to celebrate.  He thought that I would be broken and too sore to eat, but that burger was going to be heaven!  My main concern was that I was in running kit and looked like I had been to war but I needn’t have worried, there were more running medals in the Cosmopolitan than betting chips.  I had mine hidden under my jumper as I am not a big fan of people showing off (if you can show off after a 2hr 20 half marathon), but I guess we all got the same medal and the same t-shirt.

The burger was huge and amazing but the race caught up with me, so I was soon in a cab heading home.  My taxi driver complained to me all the while about the strip being closed. The 45 minute journey ended up with me being dropped in Downtown Vegas and walking home in running kit through a really shitty neighbourhood.  I tried to look as intimidating and big as possible but I think it just make me look like I had a worse limp with my cramp.  I had a bath before bed and slept with my medal next to me on one of my three spare pillows and prayed that the legs would be OK in the morning.