Regular readers (both of you) might remember that I had a friend stay over a month or two back and I tried to show off the best of the North East of England for him. I wrote up the experience of the week here but, it could be summarised with ‘nice place, poor weather’.

Well, last weekend we had weather that we seldom get down at the coast.  Perfect sun and very nearly no clouds at all in the sky.  As we walked along the promenade I thought to myself, this deserves a follow up post!

The weather has been great now for the best park fo three week.  The grasses are turning brown and the rivers are drying up but it has been a great to live at the coast, plodding in the sea to cool off after a potter along the coast.  But Sunday was very hot and a very special day.  It was the day that there refurbished dome was opened to the public for the first time.

Anyone of a certain age in the North East remembers whitely bay as a vibrant go to destination on a summers day with fish and chips, bingo, amusements, arcades, fairgrounds, gift shops.  Basically, a proper English seaside holiday resort.

Well, about 20 years ago that all ended when the fairground closed down and the majority of the things that one would come to Whitley Bay to see, went.  So did the tourists and day trippers and so the downward spiral began.

When I move to the coast 13 years ago, the dome was in the opening stages of being refurbished and I have maybe been in two or three times since to see the progress.  The last time was at a Christmas market, I think 2016.  The place was freezing cold and stripped back to bare concrete with plaster falling off the walls and ceiling.

Walking along the prom, the sea was every shade of blue and shimmering as if it was encrusted with diamonds as the sun glinted off if.  The beach was full, the prom was full and there were a few dozen people in the sea. 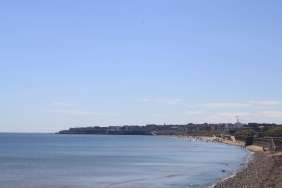 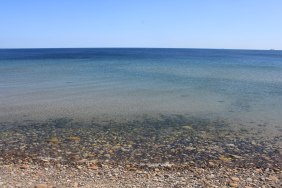 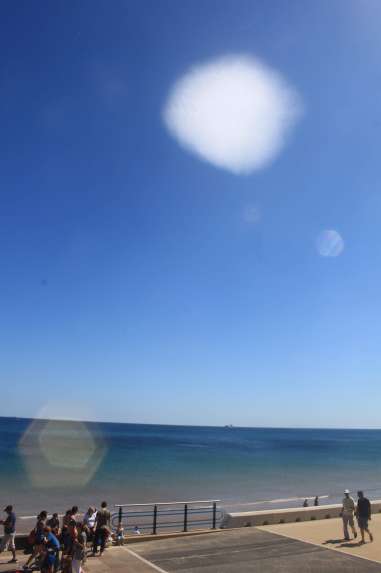 The one solitary cloud in the sky looked like a make up removing pad floating in the sky, leaving the sun to penetrate the water so that you could see the rocks and stones deep below.  It really was like being on a Mediterranean holiday or, dare I say it, the Caribbean with golden sand.  The mods were out on the prom showing off their scooters but I wasn’t envious of their leathers and heavy helmets, just their super cool Vespas.

We reach the dome at a leisurely pace, overtaken by the land train that ferries happy children and not so happy parents back and forth along the prom.  There was a Jazz band playing in front and hundreds of folks all milling about looking happy and hot in the sun.  The original dome was built in 1910 and the whole place has been renovated with period features so the music was very much in keeping with the day. 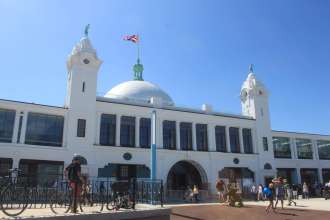 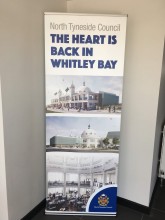 As we snaked around the 2 floors and numerous bars and restaurants that now fill the space I am convinced that I was not the only one that was slightly emotional.  I couldn’t quite put my finger on how to sum up how or why that was the case.  Then I saw the banner that the council had put up explaining, “The heart is back in Whitley Bay”.  Like so many other things around this dome, they seem to have got it exactly right.

A chap sitting playing a piano in the centre of the room, with the dome above him with golden features painted on the glorious ceiling was just about the happiest things I’ve seen in a long long time.  None of the concession were open, it was just an opportunity to wander around the building and see what was to come, but it was perfect in my eyes.

I cant wait to get back in there and see if the service and quality of the food matches the building itself, I am sure it will and that is only a great thing for Whitley Bay.  Build it and they will come back.

Having done our lap, we walked off smiling to get lunch which consisted of chips and ice cream.  Well, it was the holidays after all!  As we walked with gentle and refreshing North Sea waves tickling our ankles we spotted jelly fish flopping about and so many cute dogs it was hard to take them all in.

I hope that this is the start of a very happy new chapter in the Whitley Bay story.