I woke up all confused in a bed, my head a little foggy after my handful of beers. The sound of heavy rain hitting the bonnet of my car made me smile as I was in a motel and not a tent.  I had forgotten to eat last night, the thought of trying to order food and getting it 7 hours later made me sad. So much for eating an authentic Italian meal made by a Grandma!

Breakfast was included in the stay and so I filled up on pastries and coffee.  The two young girls looking after the breakfast room hurried around picking up and cleaning and smiling.  They were dripping in fashion labels from head to toe and looked every bit the classy and stylish Italian stereotype.

As full as a gun, I packed up and set off heading for better Alps!  I was heading for the Aosta Valley and into Switzerland and wanted to see Mont Blanc.  As the hotel was right on the motorway, I was straight off on the road and ready to rock.  The Italian motorway system had other ideas.  I spent an hour driving back and forth along toll roads trying to get the right exit to head into the mountains.  I was feeling glum.

Eventually, after many swear words and many burnt Euros, I was on the way.  Again, I was on the flat, but this time south of the Alps, and could see the mountains starting to form up on the horizon.  I was starting to get excited again. Maybe this was the day that my ‘proper’ mountain drive would happen. 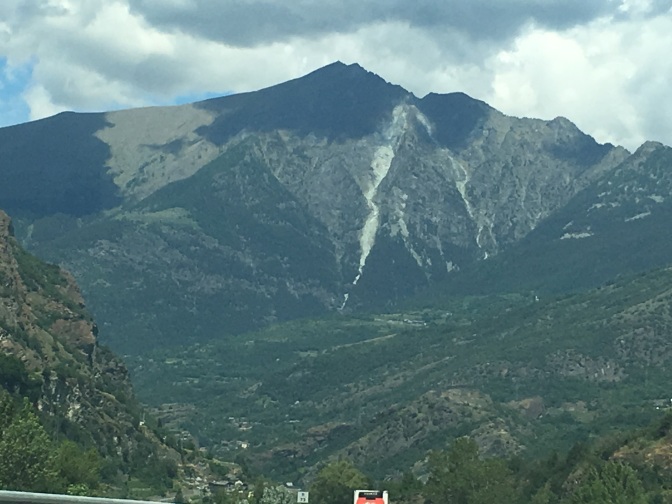 As I made my way towards Aosta we were following the River Po up the valley. It looked cold and grey but in full flow.  It looked like it was an artery coming out of the alps and was bleeding heavily; just waiting for winter to turn up to help scab it over and stop the flow with its ice.

On my left-hand side, was a small mountain and from about half way until about 90% of the way up it was covered in cloud.  It looked like the mountain was trying to hide in the clouds but failing. Like a giraffe hiding behind a tree with its big daft head sticking out.

It looked as if someone was standing on the top of the mountain throwing enormous handkerchiefs down and watching them float to the bottom of the valley but it wasn’t, it was paragliders.  Maybe about half a dozen of them floating down. The views they had must have been stunning.

I was getting close to Aosta where I would be forced to make another route call. North into Switzerland or north west into France? I realised I had still not eaten a meal in Italy, other than a hotel breakfast.  I decided that I would take a rest in Aosta and work out the next steps.

I pulled up outside of Restaurant Caesar; a busy looking pizzeria with tables outside looking out onto the wide and clean street.  All the tables were busy with families enjoying their Sunday launch and that’s always a great sign.  I picked my pizza. It was like a quattro stagioni but it was salami, red cabbage and fresh basil and it was bloody lovely.  It was so nice and the service so good that I followed up with a load of ice cream.  I was as happy as could be. I finally had my authentic Italian pizza, it was a lovely day, and I was about to attack the Alps.

It was at that table that I decided I would head into France instead of Switzerland.  Switzerland would be expensive and the roads expensive and it’s so……well….neutral.    I may not like France too much, but at least they try things rather than spend their entire existence sitting getting splinters in their backsides.

With fresh excitement, purpose and desire (and a few extra dough-based pounds hanging about my midriff) I hopped back in the car and headed for the mountains along the E25.  A few miles from the border, I stopped for a diesel top up and pottered around the gift shop inside the petrol station.  It was mainly filled with Ferrari and Italian football memorabilia but there, right in the middle of the Juve scarfs and F1 key rings, was a thing of absolute beauty.  Titchy feet loves Limoncello, I had already seen a bottle in the Duty Free on the ferry over and was planning a bottle for the way home as her gift, but she would be blown away by the splendour of this. 1

The fact that is was filled with glorious golden yellow liquid maybe made it stand out like a golden nugget in a wall of shit but, there it was,  a bottle of  limoncello in the shape of Italy.  Priceless. I felt like Indiana Jones and was worried that as soon as I picked this glorious gift up, it would set off booby traps the would force me to prove myself worthy of such a classy gift.

I took a turn off at Chenoz and zig zagged over the mountain passes and worked my way up to the peaks.  Words don’t even begin to do justice to the views and the scale of beauty that I witnessed. Eight hairpin bends later, I ended up following the traffic into a car park rather than up the road.  I didn’t want to admit my mistake and turn around, so I was pleased when I realised that I had accidentally arrived at a Passerella Panoramica, (panoramic footpath according to my Google translator), so I grabbed my camera and set off walking.

On the forest walk to the gantry, you could hear a rumble and roar that grew louder with every step. Eventually the path opened and you could see a drop of maybe 100 meters to a narrow V-shaped valley that was alive with white rapids.  The summer melt was clearly in effect and the noise was amazing.  I was as happy as Larry that the view was free to get down to and wasn’t too busy at all.  Happy with my lot, I continued along the path and as I turned a corner I stopped in my tracks with my mouth wide open. 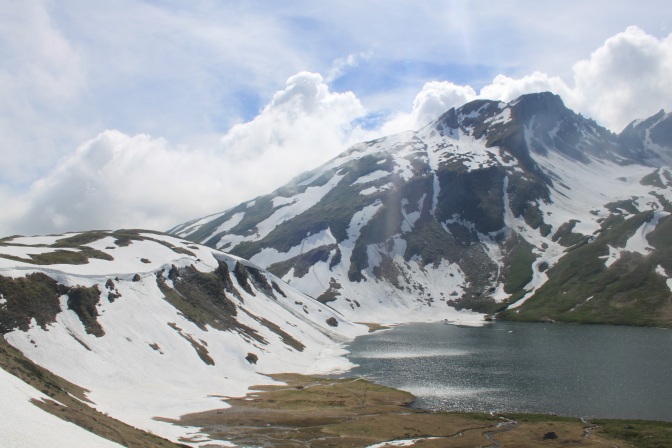 The view point wasn’t for the rushing water in the valley below, that was just a warm up act. The main event was a suspended walkway that curved away and out from the hill side in an arc of maybe 200 meters.  Looking down, there was nothing but air between the see-through walkway and the ground 160 metres below, but you didn’t look down, you looked out at the most beautiful view of Mont Blanc.

I honestly think that I spent about an hour just taking it all in. Splitting my time between taking photos and trying to burn the sights into my mind in case my camera got stolen before I got home.  I just hope that the attached pictures do it some justice.

Walking back towards the car park I got chatting, in terrible French, to an old lady that must have been in her late seventies. She had been left to sit on a seat with her small dog while her daughter walked down to the gantry I had just left behind.  She was adorable. I told her (the best that I could) that she should walk down as the view was stunning. She told me(again I think she did anyway!) that she had lived in the town below all of her life and that she was too old to walk any further. Bless her. It was hard to work out if she was happy that I had taken the time to chat with her or if she was laughing at my terrible French.

Back at the car, I continued my way along the SS26 towards the Little St Bernard Pass.  The next stop was La Thuile. I stopped to take pictures in the lovely little alpine village. I had just missed the Bataille des Chèvres (goat fight) but the town was all dressed up in its finest still and looked lovely.  Back in the car, continuing up towards the peak, there were hairpin bends and just the most perfect views and the cleanest, crisp fresh air. I stopped every so often to walk up hills and take more pictures and, again, I just hope that they do the place justice as it was stunning.

I crossed the border into France with smatterings of snow all around me, then started my slow and winding drop into the valley that opened up below me.  Bourg Saint Maurice looked like a miniature town way down below, it just didn’t look real, but with each hairpin bend, it got more and more real until the Alps were just a beautiful view in my rear-view mirror. 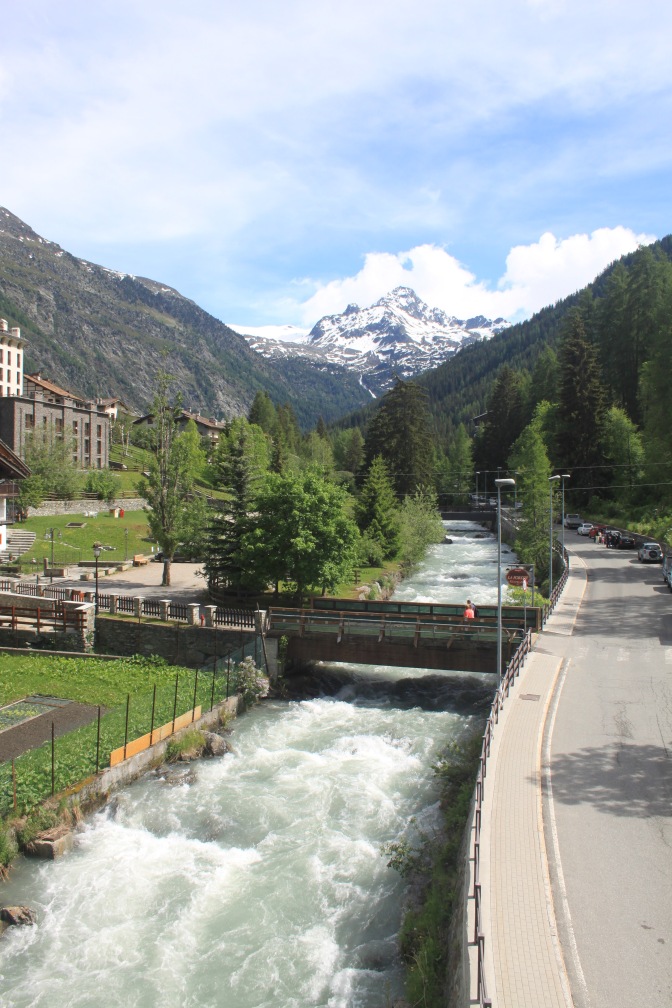 I had been listening to a podcast on the way over the mountains and it came to me that the anniversary of D-Day was only two days away.  I checked the maps and realised that I could make it there if I didn’t muck about on my way through France.

I decided that I would get on and drive as much as I could. It would be around 600 miles from the Italian border to Normandy and so the more I drove in my great mood, the easier it would be tomorrow.  I ploughed on and I was sent on a massive detour as the Tunnel Du Chat was closed.  The views of the Lac Du Bourget would have been an acceptable compromise for the extra miles and time taken on any other day, but I had been spoilt by the earlier miles over the Alps.

I was frustrated and tired by now and started looking for a campsite around 7pm.  I had another 30-minute detour looking for a signposted campsite that, when I arrived, was shut for the night.  It was getting dark and I was getting tired and so I pressed on further, happy to pay for a hotel and take the extra time driving and getting well rested in a room rather than on a damp floor in my tent.

Eventually, after a fair bit of swearing and grunting at the lack of hotels or bed and breakfasts that had been plentiful all of my day until I wanted one, I ended up in a hotel in Bourg-en-Bresse.

It was too late for food and so I had a beer and bag of nuts as I caught up on the news.  I sat and watched the updates coming in from London of the terrorist attacks and found it all very upsetting.  I had experienced such a beautiful day with amazing sights and met some lovely people, yet lived in a world where hatred and anger like that could live side by side.  I went to bad happy and tired but disappointed at some of my fellow humans.