What do you do in Panama City Airport for two hours twenty?  Very little to be honest.    I didn’t leave Newcastle dressed in full winter wear on the assumption that it was going to be pretty warm.  My stunning intelligence and vision paid off.  It was 5pm when I landed and even at that time of day the close, humid air was a warning for what things were going to be like for the next two weeks.

As a terribly nervous traveller, I always like to walk straight to my departure gate as soon as I can so that I can get used to the area and know where I need to be.  I have a morbid fear of being late. I know it’s not healthy but I can’t change!  By the time I walked to the gate, maybe a 15 minute walk, I realised that I had walked from one end of the airport, through the busy section, and out to the other side.  The idea of walking all the way back to the heart of the airport just filled me with sadness.

I sat at the gate, well next to it at least as there was nowhere near enough seating, and abused the free Wi-Fi.  Eventually, the time came to board and the second I sat down, I was asleep.  I missed two things as a result:

Maybe it was the long flight and the fact I was so tired but it really did upset me more than I thought it would.  I hate missing out on free food.

Once we landed in San Jose, after what felt like 5 minutes due to my sleep, it was time for customs.  It was all going so well, no other flight arriving and so straight to the front of the queue. Then the customs guy asked me where I was staying that night.  I had no idea!  My new boss and his wife were picking me up from the airport and I was staying with them at their home but where that home was, I had no single clue!

I sent massages to my boss, thanks to the free Wi-Fi, but he wasn’t responding as he was parking the car. Eventually, I was the last guy in the security area.  Border control guys were getting tired and they wanted to go home and so they called me back to the desk asking me what the problem was.  “Your colleague told me that I can’t get into the country until I can confirm where I am staying.  I am just waiting for him to call me back” I explained.

“Who is this guy?” they demanded.  I showed them my bosses profile picture on Facebook so that they knew that I was talking to a ‘local’ and they said, “Ah, fine, that will do”.  They didn’t need an address as in a postcode or house number, they just needed a region.  Well, by that time of night they did anyway when they wanted to go home!

My boss and his wife were waiting for me when I walked into the airport and it was great to be with friends again.  Twenty minutes later I was in the house and freshening up ready to go back out again.  A whole hour after clearing customs, there I was sat in an independent brewery in the hipster area of San Jose eating a burger and a bloody good burger at that! I had a quick beer and then we headed home, by this point it was maybe midnight local time.  As soon as I got in the car it hit me like a wet fish over the face, I was instantly the most tired man on the planet.

Once back to base, I climbed into bed and that was me out like a light, ready for my 8am wake up call for a 8.30 departure to be at the office for 9.

The next morning, I got my first understanding of the Costa Rican idea of time keeping.  The 8am wake up call never came but I was already awake due to outside noises, chiefly dogs barking.  I was all set and ready to go at 8.30 and sat, and sat and sat.  At 9.30 we left the house and got to the office at 10.30….I immediately began to panic about the time keeping for my return home flight! 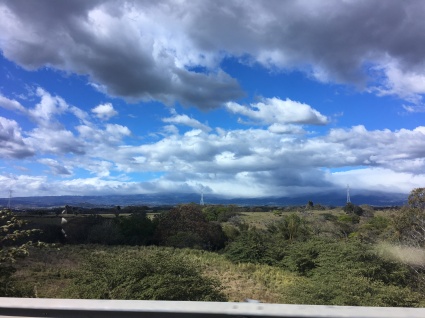 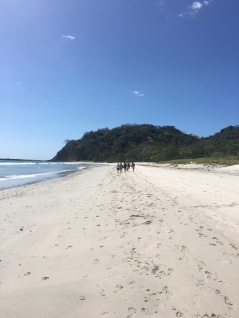 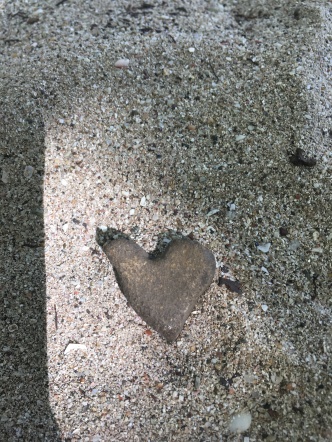 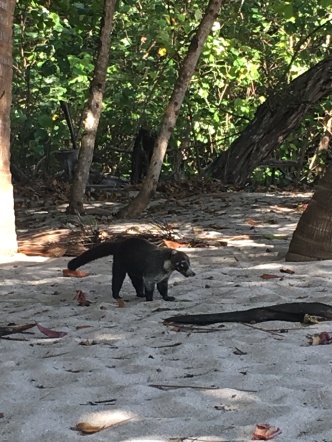 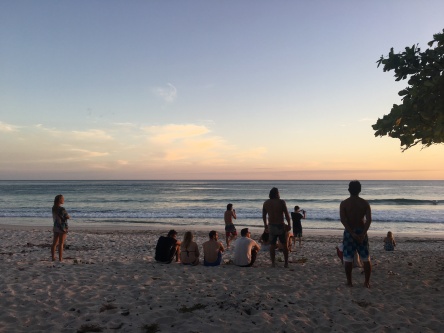 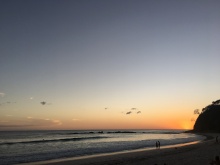 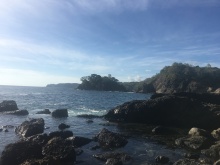 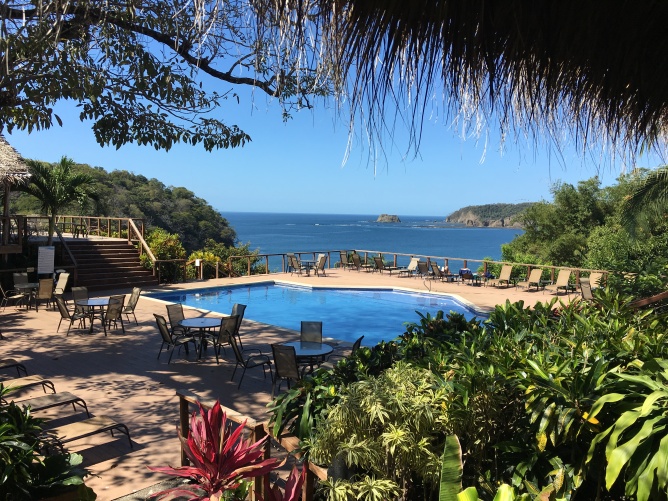 The next morning, literally as I was getting into the back of the car to be driven to the office, I was told that I was going the beach for a team building day and so to make sure that I was packed.  I quickly ran back to the house to pack a bag with my shorts, t-shirt and beach towel.  As I threw it in the back of the car, my boss called me a light packer.  I asked what he meant and he said that it wasn’t much for 2 days staying over. Balls!  So I grabbed two more t-shirts and another pair of shorts and off we went to work.

The office was cool and I met more of my colleagues and, two hours after starting my day at work, off we went for lunch.  We walked over to a ’Soda’ which is what they call a greasy spoon cafe.  The food was typical, rice and beans with a sort of Caribbean hot sauce.  When we came out, we jumped straight into a little 4×4 and I left my boss behind and travelled to the beach with two of my new workmates.

I just assumed that San Jose was on the beach, just from the way that the guys had been talking.  When the lad that was driving set off his sat nav, it was four and a half hours ETA!  San Jose is, I later found out, right in the middle of Central America.  Instead of heading east to the Caribbean coast, which is where I assumed we were really close to, we were heading west to the Pacific coast.  I know that I am totally ignorant, judge away, but I never even thought of a west coast!

We were on the road for two hours when we got to a bridge in an area called Guanacaste.  The lad driving told us that it was known officially as the Taiwan Friendship Bridge but is known locally as the “Back Stab Bridge”.  It turns out that having completed the bridge in 2003, thus connecting the major west coast deep sea port and the capital city, the president of the time turned his back on Taiwan in favour of Taiwan’s hated neighbour, China.  He then went on to have the Chinese build the national sports stadium. What a bad ass!

As we got closer to our destination the sun had gone down and the roads got worse and so the car got slower.  It was hot and dusty sat in the back of a small 4×4 and I was getting tired.  Eventually, after fracturing at least half of my vertebrae by hitting pot holes at speed, we ended up at the co workers house near the beach in Nicoya.   I say house, it didn’t have walls or, in most places, a roof.  It was more like a travellers hostel with open bedrooms, a shared kitchen and a single toilet/shower that had never been cleaned.  Ever.

I sat on the balcony, just watching the moon rise from behind the mountain and listen to the sea that was clearly close, but how close I couldn’t at that point tell.  I was offered a double airbed and settled down to sleep with no blanket, no pillow and no bedtime story.  I was out like a light though, only to wake at 2 am feeling deflated.  Well, the bed was anyway.  It looked like I was the tasty filling in an airbed themed taco.  So I got up and moved onto the hammock instead and had the worst night’s sleep I had ever had.  No more than 30 minutes sleep at a time.  I gave up and instead watched the sun rise over the palm trees that only just hid the gentle waves of the Pacific onto the golden beach which couldn’t have been more than 500 meters away.

When the rest of the gang woke up, we wandered down the dusty track to the local Soda where we had, you guessed it, rice and beans.  Washed down by a cup of coffee, we were ready for the day.  We jumped into the four by fours, and set off for the beach armed with meat and a BBQ made out of an old car wheel.

We were told that the beach was on land owned by Mel Gibson.  He had tried to close it to the public but Costa Rican law states that every beach in the country belongs to the people and so he couldn’t have his way.  Nice idea I think.  The road to it was amazingly bumpy and needed 4×4’s to access it, not least for the river that had to be forded to get there.  Apparently local councils offer to make good on these dirt tracks to make access easier but the locals demand that they stay as they are, preferring to deter tourists from the quiet beach and feeling that the challenge of getting to the beach is part of the fun of being there.

Barrigona beach, the beach in question, means ‘Big Belly Beach’ which is weird as there was no one there with a big belly and not one single ice cream or fish and chip stall.  Instead, you had maybe two miles of golden sand, perfect blue skies and powerful waves breaking on the crescent bay.  I am not a good enough wordsmith to even begin to do justice to the beauty of the place. I hope that the pictures above go some way to help.

I actually fell asleep against a palm tree, I shit you not, and woke to see one of the guys excitedly waving his arms and pointing.  An animal, that I later learned was called a Pizote, was scurrying around the camp looking to pick through the bags of food. A cute little devil, looking like a raccoon but with a nose extension made out of cork, he spent maybe 4 hours probing at the camp.  In the end, he caught us all looking at the sunset and found a way in to take the coconut husk that had been holding up the BBQ.  Despite the fact that it was smoking and glowing red, he was trying to tear it apart with his little paws, burning them and his snout in quite a carefree manner.

There was an old tree trunk on the beach proudly displaying a very amateur slogan, “Pura Vida”. I asked about this and was told that it meant “Pure Life”. It is more than a phrase, more a mantra by which they live their lives and I am very thankful that they do.

No fuss, no stress, no worries (until you’re trying to catch a plane home!).